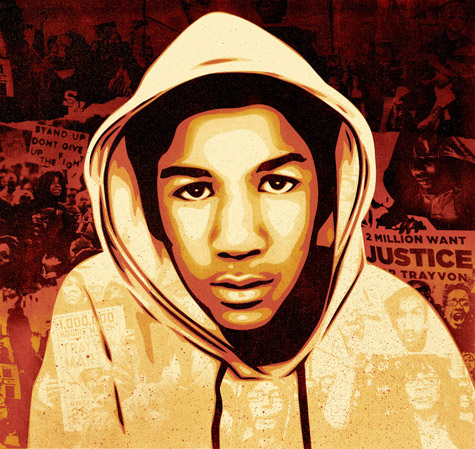 I have listened to “friends” who thought it prudent to send me messages, comment on my Facebook statuses, send me articles blaming Trayvon’s death on “Black Racism” and cite that because the author of the article was a Black man, I should agree with it. I have listened to sentiments that I’m wrong for recognizing that racism and discrimination exist. Well, to those who believe that it is ok to shoot your way out of a fight that you started…to those who believe that criminally profiling and killing someone simply because they seem to fit your description of danger (ie. Black) is justifiable, I would like to tell you this:

The fact that you can’t relate to another person’s reality doesn’t make it a non-reality. Rather than telling me and others how we should feel and what we should say/not say, how about using that energy to tell the people infected with the diseases of racism, sexism and whatever -ism they choose to have to stop being that way. I am not one who uses race as an “excuse” as you seem to think so many of us do. But I am also not one to ignore that there are injustices based on a number of things, including race, gender, beliefs, sexuality, preferences, etc. Your rhetoric that racism only exists because Black people talk (or whine, as many of you have said) about it so much is lost on me.
Where was all of this outrage and talk of not wanting to divide the races when death threats and hate speech were posted on the Cheerios Youtube channel, merely because they showed a mixed-race couple? Where was it when people were calling Christopher Dorner a “n…” and saying that they were glad that that “n… was dead?” Where was your indignation that we didn’t post about every single child killer when we expressed our outrage over Casey Anthony? Where were your protests about “not being so sensitive over words” when Isaiah Washington lost his job because he was reported to have said the word “fag?” Where were your disgust-filled notes and comments on the walls and inboxes of the people who made the racist pages depicting Trayvon Martin’s dead body in horrifying, despicable and disrespectful ways and/or threats against Black people? Huh? I’ll wait….Your incessant need to point fingers and be absolved from whatever self-inflicted guilt you may feel is not my problem! It is not up to the Black community to continue to lick our wounds so as not to hurt your feelings. You cry hypocrisy, well to that I say take a good long look in the mirror.

What bothers me most about the situations in question is that certain people continue to re-victimize the offended while justifying the thoughts, beliefs, feelings and actions of those who offend. To me, it’s the equivalent of telling a woman she deserved to be raped because she wore a short dress. Our understanding that there are certain people out there who feel a certain way about us simply because we’re Black is not what leads to the mistreatment. The mistreatment contributes to our understanding that there are certain people who feel a certain way because we’re Black.

In closing, I was told to love my neighbor as I love myself. I will continue to do so and encourage others to do the same, but please don’t take that to mean that I will stand idly or quietly by while being mistreated and having the challenges that I and many of my peers face, sometimes daily, misrepresented or minimalized. I will always fight for and speak out in defense of justice. Injustice anywhere is a threat to justice everywhere.