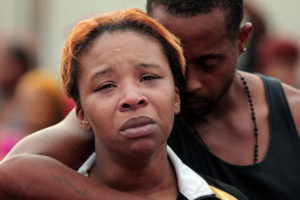 Lesley McSpadden, left, is comforted by her husband, Louis Head, after her 18-year-old son, Michael Brown was shot by police and killed in the middle of the street in Ferguson, Mo., near St. Louis on Saturday, Aug. 9, 2014. A spokesman with the St. Louis County Police Department, which is investigating the shooting at the request of the local department, confirmed a Ferguson police officer shot the man. The spokesman didn’t give the reason for the shooting. (AP Photo/St. Louis Post-Dispatch, Huy Mach)