This has been a great week. Truly. 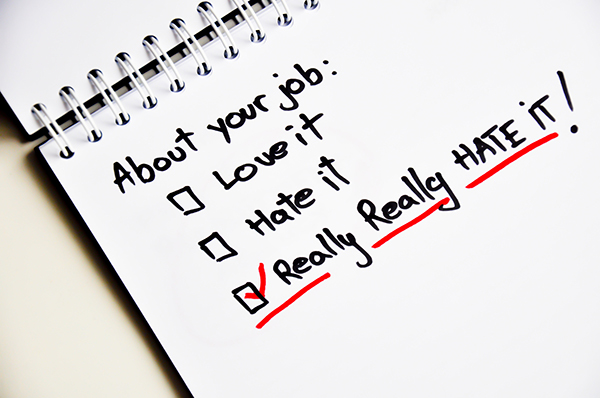 Outside of acting, I have never….not ever….not even once…had a job that I genuinely liked. Don’t get me wrong – I tried to like my past jobs. The first few days…months, if I was lucky….would be great, but after that new car smell wore off, it was back to the same old shullbit. Over the years, I’ve wondered why I’ve never been able to find a job that I actually enjoyed….or, at the very least, could tolerate. Was there something wrong with me? I mean, my boyfriend would get jobs he didn’t particularly care for and was able to make the best of the situation. My friends would get jobs that they felt pretty “meh” about, but they were still able to find their bliss. Not me. The second the job stopped “feeling” good, I was re’ta go.

This time last year, I was sitting at yet another job that I absolutely loathed. I’d actually rank this one in my top 3 worst jobs ever – with only a call center and retail job besting it. I would get physically sick from the stress of this job….Mind you, I worked from home two days a week. I only had to go in the office (I had my own office!) three days a week and that was three too many. This particular day I was working late, again, and got yet another email from the Grinch Who Stole Happiness complaining about some new way I’d failed at life…..probably sending an email blast at 3:01 instead of 3:00 or using an exclamation point in the subject line or something….(she was THAT person….literally.)

I’d had a conversation with one of the higher-ups (a leader who actually should be the boss) earlier in the day about the job breakdancing on my last good nerve. He understood and committed to doing what he could to try to make things better. After nearly a year of dealing with being berated, nonstop, begging for help and watching a boss (not a leader) refuse to do anything about it, however, I was done. I wrote my resignation letter on the spot, pinned it on King Pumba’s door and left – more than ready for my two days away from some of the craziness. I say “some” because I had a coworker whose life apparently wasn’t complete unless she started some mess on my sanity days.

I had no new job lined up and, although I did own my own business on the side, it was costing me more money than it was making me at the time. I didn’t know what I was going to do but I knew it wasn’t going to do it there. Thursday passed. Friday passed. King Pumba didn’t even think enough of me to call and talk to me about my decision…..Not as much as an email acknowledging that he’d even received it. The other higher up called on his cell phone, human being to human being, just to make sure I was ok….He said he was sad to see me go, but after our chat that morning wasn’t particularly surprised.

Not one to want to leave anyone in a lurch, I gave them two weeks….came up with a succession plan and waited patiently to train my replacement. When I tell you these folks cared so very little about me or my position that they wasted the entire two weeks and didn’t even look for anyone….Told me everything I needed to know.

Now, “luckily” I’d gotten a new gig with a company that had been on my “places I’ve always wanted to work – if I had to work” list. To this day, I still regard this company as one of the best in the world….and the job actually wasn’t terribly bad….but I was so damaged by the past job, I  just couldn’t even much do it. I worked on building my company and the MILLISECOND I had enough to leave, I did. I gave them two weeks, that turned into 4 and then 6. My last day wound up being on my birthday, which was fitting. I was starting a new journey on the first day of my personal new year.

Fast forward to present day…Yesterday I won a small business grant for my company and had an opportunity to network with other small business owners who desperately needed marketing and wanted to talk to me about helping them. When I spoke with the committee who made the decision, one of the members said he could tell my passion not only from my application, but over the phone when they interviewed me. Then, today, I had two separate clients sincerely THANK ME for something I found routine. I also had the opportunity to discuss a new partnership opportunity with another client that would help both of our companies. We both ended the conversation thrilled.

Then, it clicked. When I worked for other people, they worked me like a dog and if I held my breath waiting for a “thank you,” let alone a sincere one, I would have been six feet under somewhere. I was a commodity to them….they didn’t care about me having to drive 30+ miles, mostly in bumper to bumper traffic….or me having to work on an urgent project after normal business hours….or me spending the evening my birthday, after having worked all day, in a board meeting being dragged through the mud about things I had absolutely no control over….or that I had to stay up literally all night to complete a project because their software was terrible. I was supposed to grin, bear it and thank them for the opportunity to be mistreated.

In a perfect world, I wouldn’t have to do anything else but act all day, every day. Unfortunately, we don’t live in a perfect world – and a girl’s gotta eat. Working for myself gives me the opportunity to do what I enjoy with the people I enjoy. It feels great in my spirit when I know I helped a small business owner help their dreams come true by helping them come up with marketing ideas or by fixing their website. It feels great to learn that my strategy helped a company increase their year-over-year revenue…..and my experiences have taught me many strong lessons that I can employ when I hire new people to my team.

So, old jobs….thanks for being so crappy….because if you weren’t, I might not have gotten to experience the magic that was this week :).